The probing proceeds at all kinds of levels. Do you, the poet, have wit enough? Wisdom enough? Watchfulness enough? Words enough? Do you have craft enough? Stamina enough? Patience enough? Daring enough to bare your body – breasts, belly, booty of images – to the casual stare of any old reader, pinching your ass on any old passing page? Will you choose to share, or, like Ken Ingram, Jamaican librarian-poet, take a manuscript of maybe your best writing to the grave?

Those are just some of the queries. Then there’s Emily Dickinson, writing nearly two thousand poems, all but a dozen or so unpublished in her life, and raising a question about the necessity of audience, a question that Louise Bennett would appreciate. The Hon Miss Lou would no doubt laugh, allowing it was Providence alone that made Dennis Scott, Mervyn Morris, Rex Nettleford and Ferdie Sangster come along to help arrange an answer for her. 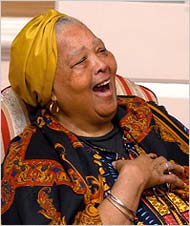 Being Louise, she probably also knew that having had her answer, and an audience for a while, fickle Jamdowners would love her and leave her soon enough. (I’m told many of today’s Jamaican children have never heard of Miss Lou. For sure we’ve scrubbed the Ring-Ding tapes – an irreparable loss.) Our little island is not Newfoundland, ready to make a bard of every man and, having done so, cup its ear to every bard…

And there are the terrible queries, every time, of whether what one is trying to say is worth it.

Fine… Enough with the smoke and mirrors, you say. Is the actual writing difficult? The answer depends on the individual poet, of course, but it’s only ever happened a couple times in my life that a poem came out, ten perfect fingers and toes, yelling at the top of its lungs. Mostly they are preemies, needing an incubator and lots of TLC over days, weeks, even months… There are the ‘rules’ of course. Pare it down, for every word must work. Cut ‘the’s’ and ‘and’s’ and ‘then’s’. Watch the adjectives, adverbs, -ing words. But rules cannot a poem make.

One of the reasons I sometimes write in traditional forms is that they help me mind the baby. I can’t entirely explain how that works, but, in the case of metre, the rhythm reassures me, and I now know enough about the music to mash it up when I need to. The rest of the time we hold hands and walk together, and it’s comforting. Similarly, I’ll reach for a rhyme and it will lead me to an image, or some other kind of word play, or drag my imagination in a new direction. At which time I am at a crossroads, with decisions to make. Follo

w the rhyme? See where it’s going, but keep a version of things as they are, so I can come back if I decide that I’ve strayed? Crash on through the brush, prepared to throw the whole thing up if it doesn’t work?

This last is perhaps the greatest challenge. I recall a poem I once saw Surinamese poet Robin Dobru perform, counselling that sometimes the poet must give a poem to the wastepaper basket. He’s right. One must be prepared to do that. And not find it hard.

Thanks to Carol Narcisse for the question, a perfect one for Poetry Day.

1 thought on Is Writing Poetry Hard? (1)